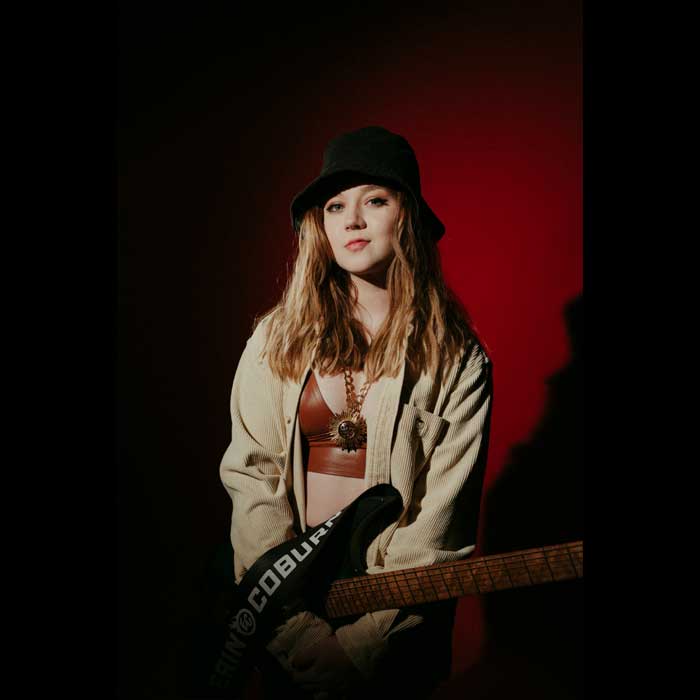 Erin Coburn is not only a talented guitarist, but is also a talented producer, singer, and songwriter.

Her lyrics convey passion, physicality, and heat in a way that is unique and vulnerable. When it comes to instrumentation for the single, Erin masterfully shreds her way through the musical journey that is “Flip,” swaggering through her own nuances on guitar, which adds her divine strong, feminine twist on the grit that is rock n’ roll.

Getting to know Erin

I put a dress on to take my guitar on a date to a sushi restaurant. We go out on the regular. My guitar is the only thing I will put a nice dress on for.

Tokyo Ghoul! Fun fact: I am going to get a Ken Kaneki tattoo on my sleeve in the future.

Tangy with a touch of earthy.

Remy from Ratatouille. He’s a friend I’d love to have.

The villain has the most fun 🙂

Simplified Chinese/Mandarin! I actually started learning about 3 months ago!

When I was really young, I remember my parents always having DVD’s of live concerts on the tv. I was especially enthralled with Joe Satriani and Prince. My parents also always had a wide variety of music on whether we were in the house or in the car. It ranged from blues to rap to old country to jazz and much more! My mom bought my dad an acoustic guitar for one of their anniversaries before I was born… dad never really played it. I eventually found it and claimed it as my own.  I got serious about guitar when I was 7 and started taking lessons. I was the WORST student because all I wanted to do was make up my own riffs and songs. I eventually found a guitar teacher that understood me and he taught me how to improvise and play the blues. With time, he started taking me to his gigs to play with him on stage and I realized WOW.  You can do this as your job?! I was hooked. I put together my first band when I was 11 and got my first paid gig at age 12. I haven’t looked back.

My third guitar teacher, John Redell  inspired me to create music because he was the one that showed me how to improvise and tap into that creative chaos. My parents were also a huge inspiration because they supported and encouraged me every step of the way.

I would say the music I create leans more towards modern Rock and RnB!   My sound has definitely evolved over the years.

Chaos. Pure chaos. Sometimes I meet my mind in a spot and time that we can agree on and then just talk it out until I find an inspiration root. Other times, I just sit at my computer and make a beat, or It’ll be just my guitar and me. I never repeat the exact same process, I have noticed it is different for each song.

BROCKHAMPTON 100%. I live for their energy.

I would love to open for Gary Clark Jr.!

I think the pandemic gave me a new experience to write about. It also made me sit with my feelings and emotions longer than I am used to… which was slightly uncomfortable BUT got a lot of songs out of it.

Yes! I have been live-streaming on Facebook for about three years now every single week so when the pandemic hit a lot of my fan base was able to tune in more to these livestreams! This helped spread the word about my music and I was able to connect with more people and fans!

Let’s all just be weird together. Embrace it.

I would be a neurobiologist.

I have performed at venues and festivals all over the US.  Anywhere from Summerfest in Milwaukee to Buddy Guy’s legends in Chicago, Knuckleheads in Kansas City,  opening for Marcus King at C2G and the Kalamazoo State Theatre in Michigan, and much more! One of my FAVORITE festivals to play is Bliss Fest in Michigan! It is literally one of the coolest festivals I have ever been and EVERYONE there has this super chill, positive vibe. I have an upcoming show in Alpena Michigan for the Alpena blues Fest on June 19.  All of my shows are posted on my Facebook page, Erin Coburn Official, and my website erincoburn.com