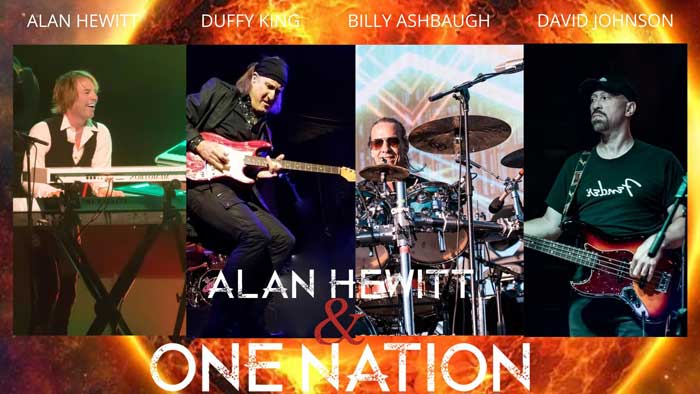 Interview with Alan Hewitt & One Nation

How would you describe the music on this upcoming album?

Alan Hewitt: Every song has it’s own identity. The new single “We’re One Nation” illustrates and amplifies what is going on in the world with the conclusion that we need to get back to peace, love and understanding. “One Step Closer” was written at the beginning of the pandemic, and started the whole ball rolling for One Nation. It encapsulates a lot of the musical influences of  the band into one epic seven minute song. “High Above” which is musically Moody Blues influenced is a tribute to John Lennon. Another song, “Hard Rain” is a song about depression and tough times that most people have gone thru at one time of their life , and is a rock anthem for mental health awareness.

Where have you performed? What are your favourite and least favourite venues? Do you have any upcoming shows?

Alan Hewitt: I have performed all over the world with The Moody Blues and have many favorites, but Red Rocks Amphitheatre in Colorado is the coolest place to play. The elevation is 6,500 ft. and the venue is carved Into the mountainside. It holds about 10,000 people and they seem like they are right on top of you. When you’re on the stage you can’t help but get high, literally! As for upcoming shows, touring will really get going in early 2022  where we will be doing a music cruise, festivals and multiple theatre tours in the US and Europe. There are lots of possibilities this fall, if all goes well with the pandemic…let’s hope!

Have you written songs for any other artists?

Alan Hewitt: I Did it My Way.

The songwriting/compositions, musicianship, arranging, harmonic content and production on both albums was benchmark setting.

What lead you to become a music artist and what advice can you give to others aspiring to do the same?

Duffy King: I was exposed to the music business pretty much from the day I was born. My mom was a professional singer on the level with best of the 50’s and 60’s singers, she had a recording contract from a major label offered to her before I was born, but turned it down as she had my brothers and sister to take care of. Both of my older brothers were in a band when I was a kid and were one of the few white bands signed to Motown Records. It was pretty cool to be in 8th grade and have Stevie Wonder playing on your brothers album.

As far as advice? Man, that’s tough. I wouldn’t want to be starting out now, the industry has been turned upside down in so many ways. On the other hand, it’s easier now to DIY it, find your own lane and have a somewhat successful career doing what you want to do. That’s about all one can hope for as an artist.

The new single “We’re One Nation” from Alan Hewitt & One Nation which is their second release from their upcoming album “2021”. A very poignant message for these uncertain and turbulent times.