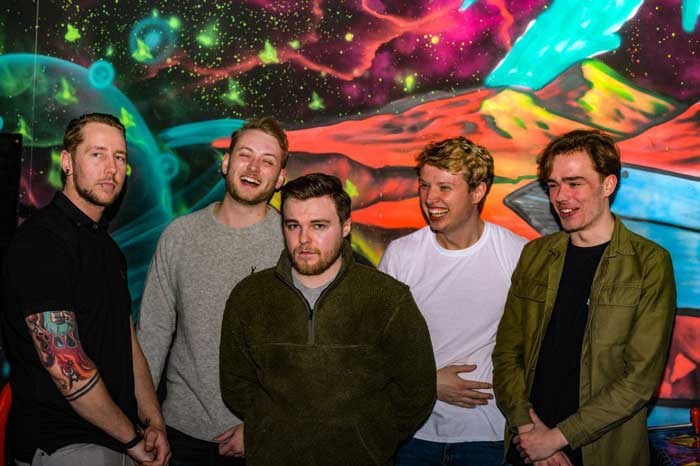 Springbar are a 5-piece indie pop band from Skelmersdale/Liverpool that have been blowing the roofs off of their local boozers since 2017. Originally forming in Skelmersdale, these five charming lads have enjoyed headlining and supporting in venues all over the country, which gained a lot of traction from platforms such as BBC Introducing: Merseyside, Charlie Ashcroft’s Audition(Amazing Radio), and even led to the band being nominated for Radio Wigwam’s ‘Best Band’ award in late 2019.

Perhaps what is most admirable about the band, aside from their entrancing tones and gut-busting beats, is the charisma they bring to every single performance. This group of lads have more chemistry than Walter White, and it all clicks into place as soon as they are given the privilege of entertaining a crowd, showcasing an energy that could only be the product of the confidence and swagger the band have in their own sound. Early 2020 saw the band take time to incorporate new guitarist Alex into the group and take a dive deep into improving their sound, culminating in their February release of “Like a Brother”. The single became their most streamed song, casting 2018’s release ‘Dangerous’ aside, thanks in part to their improved sound but also the band’s decision to seek out the local production duo Sugar House. Introducing 80s style synth sounds, and a much more pop-driven approach to song writing gave Springbar a whole new motive to make their audience two-step rather than kick someone’s head in.

While the band continue to draw from a rich and diverse pool of collective influences (ranging from Cage The Elephant, Tom Misch, and Anderson .Paak through to Merseyside heroes The LA’s and The Night Café), their single ‘If I’m in Trouble‘ continues to push the boat out to further unexplored territory for the lads. Plunging their audience into a lucid dream-like experience throughout the verses, it snaps them back into reality with a punchy chorus that delves into lyrical themes of promiscuity and hopeless romanticism.

‘Springbar have set the bar high with ‘Like a Brother’, it shows not just their individual talents for each of their respective instruments, but also their ability to bring them together to produce a great lively song that doesn’t feel overpowering’ – Sol Campbell, Reyt Good Music.

‘Fuzzy, riff-laden guitars instantly open the track amongst its indie-pop sounds and tales of love, excess and youth. It might be treading the same ground as many an indie-rock track, but it does it so well that you almost feel like you’re out on the town having a good time and living life to the max.’ – Jamie Parmenter, Vinyl Chapters.