On ‘Goodbye Beautiful’ frontman Zak has written a song that encapsulates the diverse issues his generation faces.

Memories of hearing ‘Bella Ciao’ sung by the sole Italian family in his area inspired him to write a song to voice the resentments, fears and concerns of the young over the environment and their future, as well as wider issues such as racism, animal cruelty and societal division. In three and a half minutes, Mint channel the broad scope of the song into a high-octane imperial march towards certain doom. Guitars careen through the mix mounting to an explosive and unforgettable chorus. It is a powerful statement of intent from a group who see the emotional resonance of music as a potential platform for uniting people. The accompanying video is compiled from footage taken by a friend of the band on his travels, interspersed with suggestive images: icebergs, waste, oil spillage, animal suffering and protesters clamouring for revolution. As they were developing the idea, the group reached out online and contacted organisations, bloggers and social media. “It was an amazing response and took us by surprise” confirms Sam (Veggie). “Most people were delighted to be involved and all added thanks and support.”  “We’re hoping that we will touch upon people enough to make them think” Zak adds. “We hope that it will inspire them to do their bit”. Fans of the song can expect a raw honky tonk acoustic version forthcoming too.

Mint come from the dolorous landscape of West Marsh, Grimsby. The northern and eastern boundaries are formed by Alexandra Dock, while the western edge is subsumed into the smog of the Pyewipe industrial area. The south is bordered by impassable railway tracks. It is an area with little hope, no tourists, and the dried up husk of a once prosperous fishing industry. Zak, Veggie, Lenny and Bambi all attended the same school, though the semantics of the word ‘attended’ is loosely applied here. They formed a close bond while locking horns over their different music tastes. Guitarist Lenny drew inspiration from the avant-garde sounds of Nick Cave, The Birthday Party and The Pop Group, while the other three members leaned towards indie classics and the harder edges of rock. They went on to study at Grimsby Institute and the idea to form a band was soon realised and became serious in 2018. Being half Palestinian and sporting wild hair in an area affiliated with skinheads, front man Zak Rashid had it hardest coming up, and started to look outside of his home town. He was a young pro skateboarder and surfer by day and taught himself graphic design by night. When he is not gigging he runs the (only NE) local surf shop and designs artwork for artists such as Lucy Spraggan, Black Honey and False Heads. Lenny works in the cafe next door whilst Bambi and Veggie work shifts in soup canning factories. Mint have enjoyed UK radio support from Radio 1 and playlisting on Radio X and have performed at all major UK festivals. In mid 2019 they started to realise their sound, an idiosyncratic fusion of indie melodies set to beefier instrumentation. Recently they have begun work with award-winning production team Sugar House and taken on management. 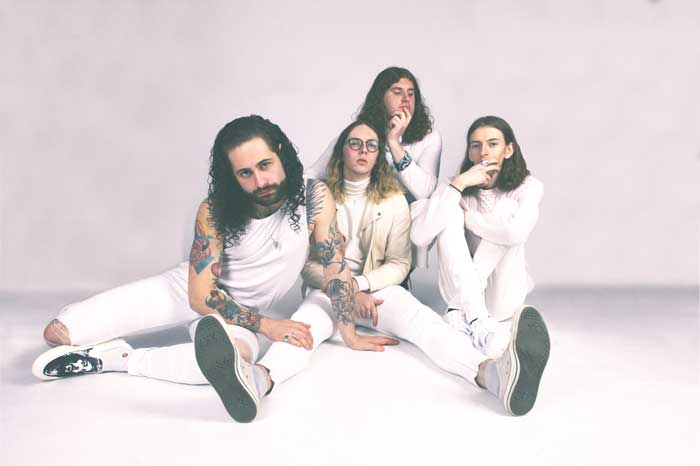