The Handyman written by Nicholas Downs

by Divine Magazine
in News
Reading Time: 3 mins read
A A
0

Haven’t we all had the dream? The one where we find a gorgeous and sexy handyman to drool over and have naughty fantasies about? Now you can live out one man’s fantasy –  or should that be two? – in this quirky, feel good and funny short from Nicholas Downs and J C Calciano.

It’s won too many awards to mention (the ones below are some of them) and has featured in many film festivals across the globe. 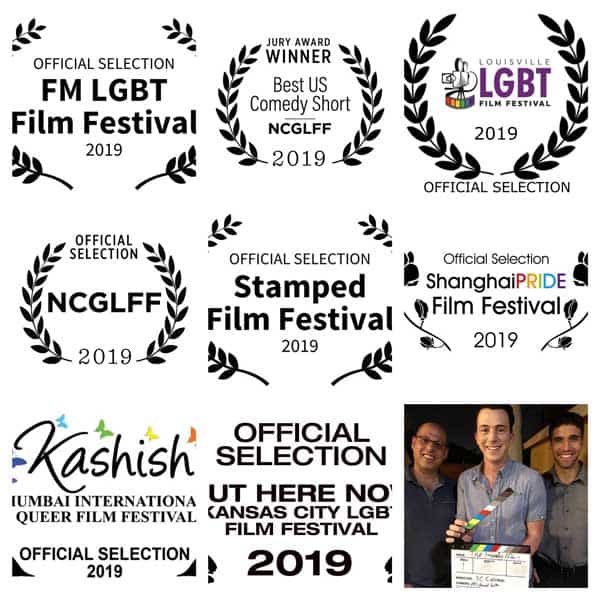 What’s it all about?

A single, gay man schemes creative ways to have a hunky repairman continue to have to come back to his house to fix things, but suddenly the fantasies become more than either of them expected.

At the outset, I will be the first to admit that I am a sucker for a comedy, especially if it has a bit of whimsey in it. ‘The Handyman’ fits that bill perfectly. There are only two characters in this short film; Walter, played by the funny and always delightful actor Nicholas Downs, and Frank the Handyman, played by Derek Ocampo, an actor with the right amount of boy next door charm and smoldering sexuality (not to mention, abs for days).

Walter, an unlucky in love, somewhat nerdish gay man, discovers that he has a plumbing problem and calls a handyman. Frank appears on the scene, and Walter’s imagination goes on overdrive. In his dream, he sees Frank coming up from underneath the sink and taking off his wet shirt to reveal a perfectly sculpted torso, but when Walter comes back to reality, Frank is standing there wanting him to sign the workorder, shirt on. After Frank leaves, it becomes Walter’s mission or obsession to break something else so that Frank can come back and fix it, finally sabotaging the hot tub. Frank returns and both fantasy and reality begin to blur together. (I don’t do spoilers, so you’ll just have to see the film for yourself)

Visually, the production is exceptionally well done. The use of color and lighting are top notch. The film, short as it is at eight minutes, packs in as much story as possible and does it seamlessly, moving from scene to scene effortlessly. The dream sequences are handled with just a touch of special effects magic, enough to give a dream-like quality to the scene without going overboard. (like Frank rising shirtless out of the hot tub – wow) 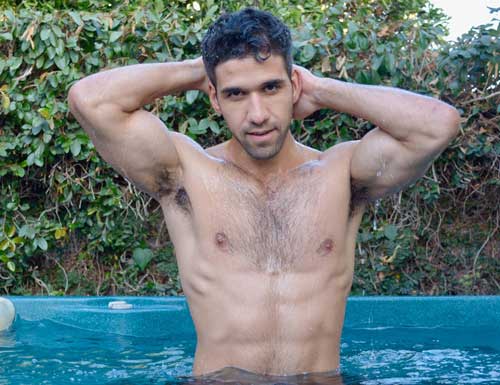 Nicholas Downs, a man who wears many hats in the film industry, stars in and wrote the script for this short film and does both beautifully. The film is well written and developed, with just the right amount of reality and whimsey to keep it interesting and funny. His characterization of Walter is excellent and totally believable. Derek Ocampo is a perfect foil for Nicholas’ character, as the object of Walter’s fantasies, being his professional handyman persona and dream man and making both convincing. The two actors work well together and watching them interact is delightful.

I can’t leave this review without saluting one other person connected to this film, the director J.C. Calciano.  Having proven his comedic directing skills in such movies as ‘The Ten Year Plan,’ ‘E-Cupid,’ and my personal favorite ‘Is it Just Me?,’ he deftly handles the storyline without getting either too cute or bogged down, but keeps the story light and at an enjoyable pace. I can’t wait to see his new project ‘Steam Room Stories, the Movie.’

All in all, I found this short film an enjoyable romp, funny, but with heart. I have only one complaint, I wanted to see more. Would Nicholas Downs ever consider a full-length version…Hmmmm?