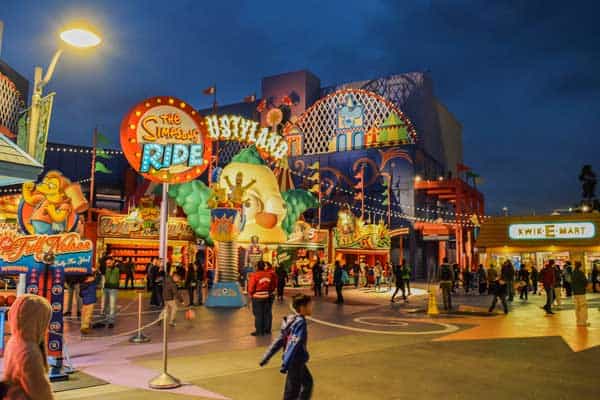 Disney world theme parks are nothing new, but in the last couple of years theme park experts have expanded the movie genre to create entertainment parks where the rides and attractions are based on Hollywood blockbusters such as The Hunger Games, Cloudy with a Chance of Meatballs, Hotel Transylvania, The Harry Potter movies and Step Up.

For instance, Lionsgate has opened Hollywood theme parks in New York, London, Atlanta, Dubai and China, while Paramount and Warner Bros. are looking in to opening parks in China. DreamWorks Animation is also planning a DreamCenter in addition to three indoor parks in Russia and a Shrek attraction in London.

Disney and Universal are considered the “big two” of the theme parks business and these Hollywood studios have been keen to either own their own parks or lands within parks where they’ll feature interactive fan experiences.
Here are three diverse Hollywood theme parks and the must-dos when you’re there.

Considered by many to be the best Universal Studio theme park in the world, US Hollywood surely pulls out all the stops to give guests a true feeling of being close to their movie stars.
The main attractions at this park are the Harry Potter World, The Simpson’s Springfield village and the new Walking Dead area. At all the zones guests get to interact with cast members and experience different rides, shows, eateries and shops that stock memorabilia.
Also worth doing while you’re here is the Hollywood Studio Tour where you get to see movies being made in real time and also pass legendary sets such as the one created for the plane crash scene in War of the Worlds.

The enormous motiongate Dubai theme park opened in 2016 and is part of the larger Dubai Parks and Resorts entertainment village.

The park is divided into four zones: DreamWorks, Lionsgate, Sony Pictures and Smurfs Village, bringing to life some of the most recognizable Hollywood characters from the big screen through 27 attraction including 5 roller coasters.
Movies featured include The Hunger Games, Underworld, Ghostbusters, Zombieland, The Green Hornet, Hotel Transylvania, Cloudy with a Chance of Meatballs, The Smurfs, Shrek, Madagascar, Kung Fu Panda, and How to Train Your Dragon.
Tips:

Movie World on Australia’s Gold Coast is the country’s only Hollywood movie-based theme park and hugely popular, drawing big crowds during the school holidays.
Rides and attractions are based on blockbusters such as Scooby Doo, Superman, The Green Lantern, Batman and the Wild West of the USA.
Fright Nights featuring scary movie characters such as Batman’s Scarecrow, and Beer ‘n Barbecue weekends, make for great special events.
Tips:
• Get yourself a ‘Fast Track’ wrist bands if you don’t have all day
• Don’t miss the 4D Cinema movie, “Journey 2 – The Mysterious Island”
• The park is famous for its Superman Escape roller coaster that goes from 0-100km/h in less than two seconds
• Some of the big rides, such as Superman Escape and The Green Lantern (the steepest drop in the Southern Hemisphere) are closed during off-season
More Hollywood theme parks coming soon
According to Hollywood Reporter a 20th Century Fox film and TV-inspired theme park is headed to open in Dubai in the UAE in 2018.
The studio’s second theme park (the first one opened in Malaysia) will include rides and attractions based on Fox movies including Ice Age, Rio, Planet of the Apes, Aliens, Night at the Museum, Titanic, The Simpsons and Sons of Anarchy.
Lionsgate plans to license its film properties to new theme parks that they hope to build around the Hunger Games and Divergent film franchises near Macau in China late in 2018.

Lelo Patience Klaas is a content marketer and a blogger that loves to write about all sorts of things especially luxury accommodation, travel destinations and online marketing in general. Interests include catching up on SEO news and doing youth development programmes within her community. Lelo is a very spontaneous person that loves to live life on the edge. She has a strong aspiration to learn new things and eager to see the world.

The Top Weekend Getaways in Kentucky