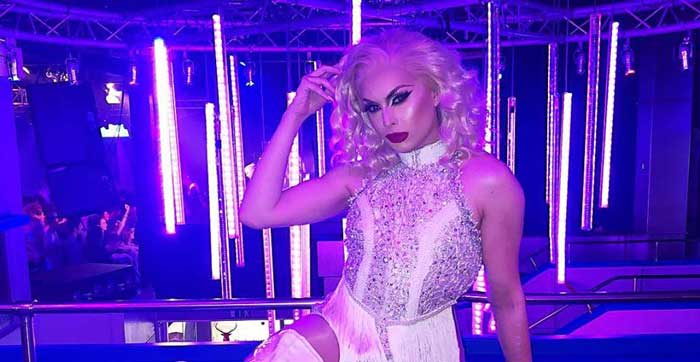 Divine is thrilled to bring you a one on one interview with Luke Underwood aka UK Drag Queen Cheryl Hole. I met up with twenty-five-year-old Luke to ask him about his journey to becoming an entertainer and renowned queen of stage. 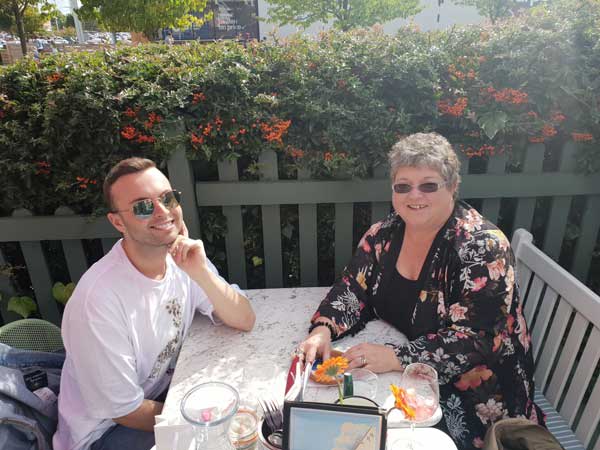 We sat out in the sunshine discussing people we had in common, diets and the joys of fitting into the dresses worn as Cheryl. While he watches his diet, he’s still happy that he can enjoy the sins of the occasional junk food binge.

He recently appeared on television talking to the BBC. Tell us a bit more about that.

I’ve never been as nervous as when I had to appear on live television in front of millions of viewers. The preparation for this interview was such that I needed to ensure my outfit was conservative enough to be seen on telly. This was a challenge. I decided to go with my ‘I Dream of Genie outfit’, making it more acceptable by pinning the chiffon bits to my crotch, with a feather boa over my legs to ensure Cheryl looked respectable enough. The other thing they asked me to do was drop the word ‘Hole’ from my name and only use Cheryl. I wasn’t allowed any innuendos and puns either.

(Sue comment – One doesn’t think about these sorts of things when being asked to appear on national television…I commented that it wasn’t really authentic then, interviewing Cheryl Hole, as so much of her persona was being asked to be suppressed.)

I suppose it was more like interviewing Luke and I wasn’t fazed by that. I did struggle not to swear on breakfast television though, and even adopted another, higher voice to keep my mind on not uttering any profanities.

What mishaps if any have you had while you were working, on stage or in a performance?

Reminiscent of Kinky Boots, my biggest issue are shoes.

(Sue’s comment -Entrepreneurs out there, this is still an untapped market. Sturdy yet fashionable shoes and boots are a must for the serious drag queen.)

One time on stage, my heel broke off on stage in a theatre and went flying. I had to hobble over to fetch it, while making it look as if it was meant to be part of the act😊

If you haven’t already watched Cheryl’s unique Death Drop – you can see a clip of it here on BBC telly – then you should.

With my dance background, (Luke obtained a 2:1 in dance and choreography at university) I love the high energy stuff and I make it a part of my act.

Other mishaps include the time my dress strap broke, and I revealed a nipple… what’s a Drag Queen to do but leave it showing, because everyone knows it’s there. 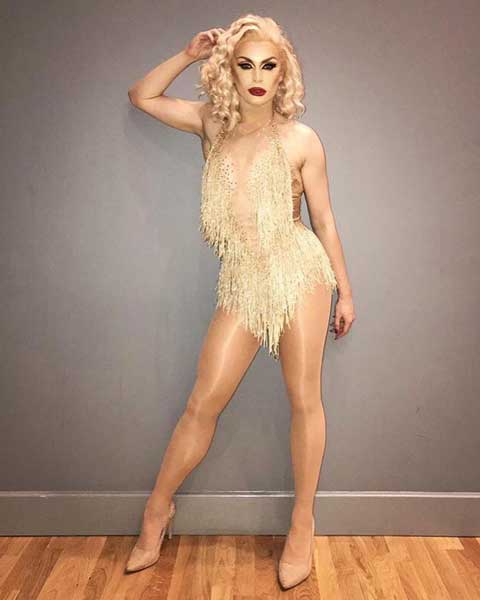 How does Luke/Cheryl feel about social media?

Social media is very important and it’s critical to be able to promote your brand and let people know who you are. Cheryl is prevalent on Instagram, Facebook and Twitter, and says while it’s a lot of work, it bears benefits. Shows need to be promoted; audiences need to be engaged and remaining constantly in the public eye is what sells tickets and obtains more gigs. To make a living out of being a Drag Queen, venues need to be able to draw the crowds, to pay the artists appearing and still make a profit after paying artist booking fees.

Your Drag Mother is a queen called Meth – tell us a bit more about this relationship.

She’s fabulous and has helped in so many ways. I’m so grateful for having someone like her who helped mould me into who I am today. My persona is simply being myself, being real and channelling the inner Luke to become Cheryl, which I think is important for me as a performer.

Not only do I have a Drag Mother, but my family and boyfriend are very supportive and that goes a long way to helping me get where I want to be. I’ve been doing theatre since I was five years old, so my family always knew I was going to be in the spotlight someday 😊

I have no problem being a Drag Auntie but not a Drag Mother. The responsibility for nurturing and developing young drag talent is not something I feel I want to do. I’m happy to give advice, share hints and tips, and guide baby Queens however they need.

Advice for Queens starting out in this business?

One thing I will say to anyone in this business – know your worth and make sure you charge accordingly. I get so many people asking me to do gigs and performances for free. Unless it’s for a good cause like a charity raising funds, I won’t agree to that. Even Queens just starting out should be paid something even if it’s £40. Make sure your time is worth something and while yes, exposure of any kind is good, sometimes people expect this to be the norm. Don’t cheapen yourself by agreeing to let other people sometimes take advantage of you or exploit your work as an artist. You’re a business so treat yourself like one.

My second bit of advice is very important. Always be nice to everyone. It sounds trite but it’s the best bit of advice I can give you. Treat people with respect and never get nasty. You have no idea what might happen in the future and that person you’ve just been rude backstage to might be the nightclub owner from a club you’ve been dying to work in. 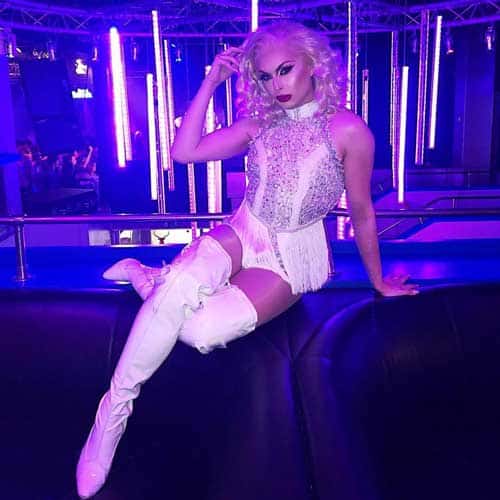 What’s your ‘Eureka’ moment, perhaps when you made a life changing decision?

I was working in hospitality, having worked my way up from waiter to Assistant Manager. I’d saved a lot of money working six days a week, long hours so had a considerable nest egg.  After a really crappy week at work, one day I simply snapped. I wasn’t where I wanted to be. I handed in my letter of resignation and booked a flight to LA. I worked my notice in, and then got on a plane, and headed out a couple of weeks later.

They were taping the Ru Paul’s Drag Race season eight finale out there. I bought a ticket, sat in the front row and loved every minute. I travelled around LA, did the sightseeing thing, went to Universal Studios and got to walk down Wisteria Lane from Desperate Housewives (I’m a HUGE fan of the show) and this was one of the highlights of my trip.

My most memorable moment was when I got off the open-air tour boss and stopped by Ru Paul’s Pop Up shop. I was told I couldn’t get in because it was closed for filming. I popped my head in and saw Ru Paul! I decided I wasn’t moving. I guess I must have made an impact because twenty minutes later, the crew came over and told me Ru was quite happy to meet me. He even recognised me from the finale on the night and I was gob smacked. I wanted to thank him for everything he’d done to help me recognise my dream. He’s made drag acceptable and brought it to the fore for people like me.

I came home more enthusiastic and driven than ever and worked at getting my craft honed and I made it happen for myself, starting out at a Glitterbomb event, and now I’m where I am and want to be.

What we present on the stage normally isn’t reality and I think a lot of drag fans fall in love with the persona and then they get obsessed, and I’m been guilty of that myself as a performer, becoming Cheryl and working, working, working. I left home in the dark, travelled to venues and came back in the dark, exhausted. Haydn, my boyfriend, reminds me I’m a person, Luke, and he grounds me.

Luke recently got engaged to his long-term boyfriend and best friend Haydn and we wish them all the best for their life together.

Costumes can be expensive. You need to find a provider you’re comfortable with and understands your sense of dress. I’m no good with a sewing machine even thought I’d love to learn. I order mine sometimes from Bang London, who do some wonderful stuff. You need to understand your budget and your concept before you decide on a costume. Make up, again, can be an expensive outlay. Hair -wigs- is probably the most expensive part of the act. I have a wig graveyard at home, and one of the things you need to do is look after them, to make them last. You need to let them drip dry, I use fabric softener to keep them looking them soft.

We’ll leave you with these wise quotes directly from Luke 😊

‘Your opportunities will come when they’re right. Work hard, get yourself out there but never be upset because somebody’s got an opportunity that you haven’t’.

“A lot of people think a drag queen is just a man in dress. It’s not – there’s a lot more to it, a lot more craft.”

Thanks so much Luke for this frank and wonderful interview, and we just know you’re going to go onto bigger and greater things.

News about Cheryl Hole and where to find her