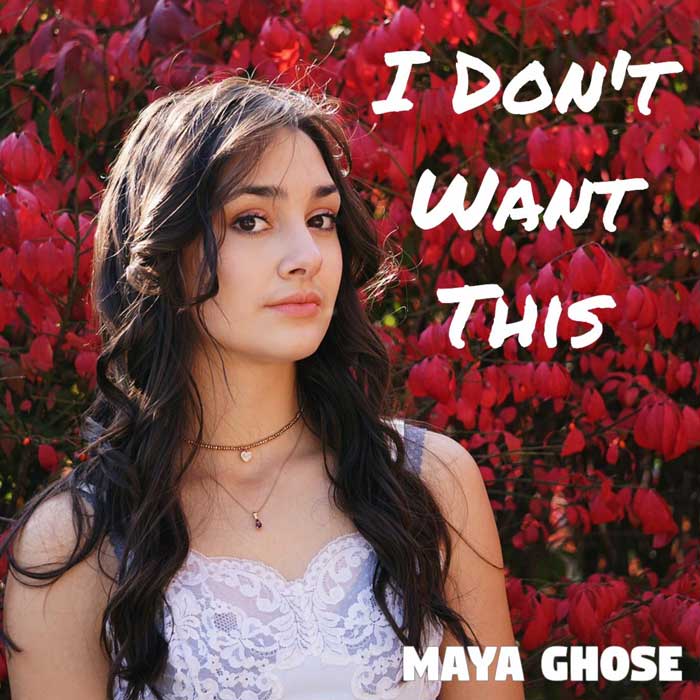 After the success of her debut single How He Looks At Her which was just released five weeks ago, indie pop artist Maya Ghose drops her next release I Don’t Want This. With a memorable melody and a relevant message, I Don’t Want This is currently available on all digital platforms including Spotify, Apple Music, and more.

The song opens with Maya’s smooth and sultry lead vocal layered with rich harmonies, and supported by Maya’s signature grungy guitar vamp. The song’s message is a universal one, but comes from personal experience. “For anyone that has ever felt unheard or has felt that boundaries have been pushed, this song is for you,” says Maya.

Maya also credits her brother, producer and engineer, Brayden Ghose for creating the sonic landscape that drove the message she wanted to deliver. “My brother has skills,” says Maya rather succinctly. The final production highlights a funky rhythm section, pulsing rhythm guitar, but with just enough space to allow the impact of the lyrics to shine through.

The standout 17-year-old young woman is getting some buzz on the indie music scene with her phenomenal vocal control throughout her music. Singing in her lower range with raspy undertones and effortlessly switching to a sweet falsetto, her sultry voice sets the mood for a bohemian presence.

Hailing from the New England suburbs outside of Boston, Maya is a hard-working, self-motivated, creative person who is also quite grounded and down-to-earth.Her influences range from Lauryrn Hill to Katy Perry and unique pop rock style can be described as Nirvanna meets Kelly Clarkson. Maya comes from a musical family and has been writing/playing music for over a decade. She can play guitar, piano and dabbles in bass for fun. Her lyrics are deeply personal and heartfelt, yet explore universal themes such as loyalty, independence, strength, betrayal, friendship, and love.

This rising teenage indie artist has written multiple tunes for school productions, arranged for a capella groups, co-written songs for the stage, and penned pop, rock, funk, and country songs, which will be represented on her upcoming album. The collaboration with her brother, producer/engineer, Brayden Ghose, on the album has been deeply fulfilling. As a creative and soulful singer/songwriter radiating bohemian vibes, she takes pride in releasing her music the way she envisions and was quoted saying, “I want to release music on my own terms and be involved in the entire creative process.”

With a growing oeuvre on 152 Records, London based electro rock band Prïnceps is poised to do big things. While their repertoire is a fearless explorer of genre-spanning...