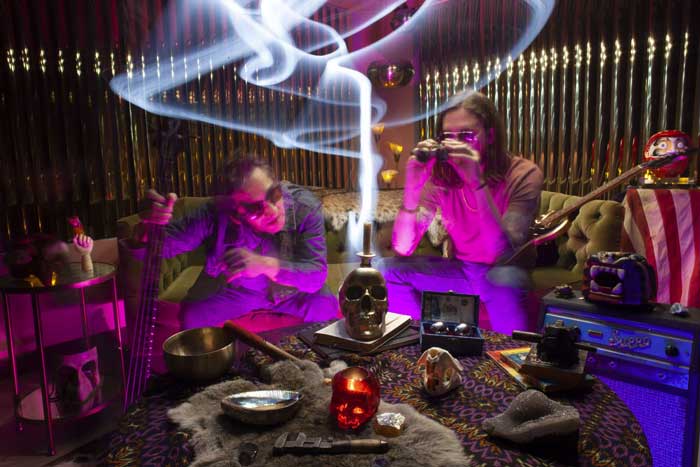 Psych-rock collective The Gama Sennin released their transcendent self-titled album illuminating a hypnotic journey of self-discovery. The turbulent tunes on The Gama Sennin are fueled by heavy melodies and massive riffs bound to capture the attention of any troubled listener. Themes of self-reflection, accountability, and finding immortality resonate in the lyrics. “We all have to look into the darkness at some point in our life,” said Kevin McGuire, the group’s frontman. “That is what this record did for me.” Capturing youthful anger, the grungy tracks are reminiscent of 90s rock sounds with dark chords and eerie vocals. This album is definitely worth a place on your playlist.

The collective’s desert groove makes for a unique sound in combination with the solemn guitar strokes. “Life is all about transitions,” says McGuire. “Each stage of the record has a space where the music allows the listener to look into their own void.” The album opens with the anxiety-fueled debut single, “I Kill You,” introducing the ongoing theme of destroying one’s ego. The single is accompanied by other dark and mind-bending sister songs, including “Without” and “Trigger Finger.” “Without” leads with melancholy strokes of electric guitar and gloomy yet introspective lyrics. Speaking of past mistakes McGuire has made, the song is a doorway into acceptance. “It was the first reflection into admitting the problems I had created in my life and why things always seemed to fall apart. My life could be anything I wanted if I could stop the noise, walk away, and journey inward.” Juxtaposing the moodiness of “Without,” the canorous rhythm introducing “Trigger Finger” is sure to prompt the urge to tap along fiercely. The song is about realizing you are in control of your own destiny and how to respond to life’s triggers. Verbalising the need to “shut off and let go,” the lines describe being emotionally torn into pieces and how aggression blinds us and leaves no room for conversation.

The California-based collective, featuring members of OFF!, Oingo Boingo, and Daft Punk, seamlessly combines alt-rock, psychedelia, and electrifying emotional depth. Their unmistakable West Coast sound incorporates pulse-pounding and earth-shattering musicality. Give it a listen and add it to your playlists.

To join the journey into madness, follow their socials  @thegamasennin.