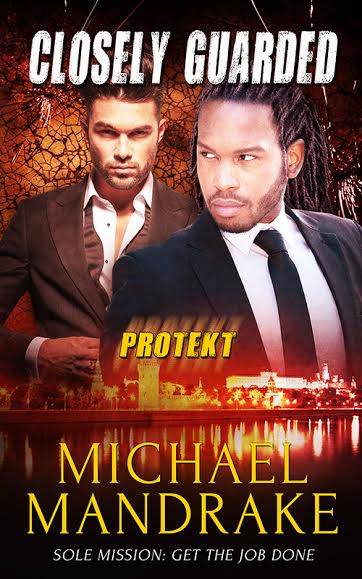 Tagline: Promises are meant to be broken sometimes. Can Kimball complete the mission and keep his feelings for fellow agent Darien in check in the process?

Blurb: Darien Mosely, aka BA Pointe, is a former NYPD officer with a chip on his shoulder. He came to PROTEKT in search of a new identity and career after being accused of killing a man in cold blood. Darien’s keen perception is what has made him an asset, but his cockiness has often landed him in hot water.

Kimball Emerson, aka Justice Masters, is an important figure in PROTEKT. Being a former army sergeant, he’s used to keeping secrets and being in danger on a regular basis. As one of the prime figures in the organization, he is counted on to be the finisher and, for the group’s latest task, he’s been called upon to find the leaders of a Russian mob. It should be easy enough with all his knowledge and special skills but not with his close friend Darien Mosely along for the ride.

Kimball made a promise to his fiancé that he’d come back in one piece and not watch his partner’s ass, but he isn’t sure he’ll be able to keep the latter. Darien and Kimball have been best friends for five years and, at a Christmas party several months ago, they shared a kiss that left an indelible mark on their relationship.

This latest mission calls for focus and calmer heads if they are to find the offenders who are bringing illegal drugs into Russia. The question is, how can they do it with mutual feelings and the threat of extreme danger looming over their heads?

“Another dangerous mission, Kim?” Mike Jacoby clicked his teeth and slammed the skillet into the sink.

The noise jolted Kimball out of his thoughts. He’d been going over special plans handed down to him from Chief Wes for the better part of an hour.

“I thought you were done with the tough jobs. Darien is good at this…and single. Why the hell can’t he do it?”

“Because he’s not qualified for it. Babe, listen. I got some skills Darien doesn’t.”

“Well, how the hell is he the top agent and you’re not?”

Kimball bit back a groan. “I am…just… Damn, babe, don’t go there. Don’t try to pit me against my best friend, okay? I’ve known Darien too long and I care for him too much.”

“Yeah, yeah, I know. So much you allowed him to kiss you at the last PROTEKT Christmas party.”

Kimball sighed inwardly and rose from his chair. He’d never forget that kiss because Mike wouldn’t let him, and he couldn’t deny his attraction for the man he’d thought of like a brother. Darien Mosely, aka BA Pointe, always struck him as a man who liked his freedom, but the embrace they’d shared about seven months ago had given Kimball mixed signals. The kiss had been rough and passionate, lasting a couple of minutes, until Mike had come in the door, dropping his glass and disturbing the moment. It had taken weeks to convince his lover their embrace was a drunken mistake shared between two friends. Obviously, Mike was still hurt by what he’d seen.

Despite those feelings of longing, Kimball still loved Mike Jacoby. He’d suppressed the feelings he had for Darien in order to keep the peace. Bottom line, Darien had waited too late to show Kimball how he really felt. They’d been in PROTEKT long enough to do something about their infatuation with one another, but fear of compromising their friendship and mixing business with pleasure stood in the way.

To relax his man, Kimball walked behind Mike then wrapped both arms around his partner’s waist. While casually running his hands over his lover’s belly and chest, he kissed the side of his ear, nuzzling the space above his lobe.

“I thought you forgave me.”

Kimball could feel Mike’s muscles contracting under his touch. He crouched down a little so his cock could line up with Mike’s covered buttocks.

Kimball lowered his voice an octave and rubbed the head of his erection against Mike’s ass. He gasped at the feeling, running his hand down to Mike’s crotch, cupping his balls in his palm.

“Oh God, Kimball Emerson, you’re gonna be the death of me.” Mike turned around and fell into his arms. “Every time I bring up that kiss, you got an answer that makes me forget it.”

Kimball cupped Mike’s chin and pressed a soft kiss on his lips.

“I have to. I wanna make sure you know you’re my man. I swear to you that Darien is a friend, a close pal, my fellow agent but nothing more.” Kimball sensed the twinge in his heart saying those words. Before Mike, he’d always wanted it to be more with Darien, but his buddy lived the life of a playboy and didn’t seem to value commitment like he did.

To distract himself, he lifted his boyfriend onto the kitchen counter. He placed both hands on either side of Mike’s hips and positioned himself between his legs. Thankfully, Mike looked to be under his spell as he hoped, which meant the mentions of the Christmas kiss would go away for now. If he didn’t have the meeting with Wes, Brenda and Darien, he’d strip Mike in the kitchen to make sure of that.

“I mean it. We’re getting married on Christmas, in front of all our families and friends. We have rings. We’re almost ready to spend our lives together—”

“As civilians, right? You promised me.”

Kimball nibbled on his bottom lip and nodded hesitantly. “Yes. I’m gonna tell the chief that this is my last big mission for PROTEKT, then I’m retiring.”

Mike’s smile widened and he grabbed Kimball by the arms, bringing him in for a bear hug. “God, Kim, I can’t wait till then. If I had a time machine, I’d get us there now.”

“Me, too.” He suppressed a groan and kissed Mike squarely on the lips.

“Good. I’m worried about this one, though. You’re going back to Russia, dealing with the mob and rebels of the Freedom Party.”

“Yeah, and that makes it even more exciting. This is what I do—what I live for. I’ve been waiting for this kind of assignment for months.”

Mike’s smile turned upside down. “Really? Is that all?”

“Mike, come on. You know I mean professionally.”

“I know. I know. But I can’t handle you being a target, Kim. Just be careful. Promise me you’ll watch your ass.”

Kimball laughed. “You are so jealous. You got nothing to be worried about, all right? I love you, only you, Mike Jacoby. You’re my life.”

“I love you too, Kimball Emerson.” Mike grabbed Kimball again.

While they embraced, Kimball thought over the words he’d just said, the promises he most likely would break at first chance. His last big assignment? He doubted it, because he and Darien were tops in PROTEKT. As long as he worked there, he’d be called upon for whatever Wes saw fit.

Retiring? Kimball couldn’t see it happening. The traveling, the money and the desire to uphold justice in his own way was too strong to give up. He didn’t think he could survive being just a normal civilian.

The promise to be careful? Kimball always took chances, and this one called for him to take a huge risk that could be deadly for him and his partners.

Watching Darien? He’d break that one as soon as he got to the warehouse.

Because the feelings were still there, and, although Kimball was getting married to Mike, those emotions for Darien Mosely would not be disappearing any time soon.

Romance and erotica author Sharita Lira believes that love conquers all. Writing sexy stories of people who might be complete opposites, but somehow make a lasting connection that often leads to a happily ever after. Happily married and mother of two, Sharita never allows complex plots to deter her from writing the story. Inspired by heavy music, attractive people she’s seen in person and on the internet, Sharita always has a tale on her brain. In addition to being a computer geek and a metalhead, Sharita loves live music, reading, and spending time with family and friends. She’s also a founding member and contributor to the heavy metal ezine FourteenG. For more information, please visit http://www.thelitriad.com and if you’re a fan who would like exclusive updates on her writings and chances to win prizes, sign up for the newsletter!