Celebrating the February 7th release of their third studio album, Church, Galantis has partnered with entertainment technology company Wave to create ‘Church of Galantis: Live Virtual Concert in Wave,’ a stunning VR experience that will be shared with their global fanbase on February 26 at 11:30 AM PT.

“We’re so excited to be able to share the Church of Galantis show with all of Seafoxnation around the world,” said Galantis. “We had this idea to bring Church into a virtual realm, where everyone could come together as one body of music lovers and share this awesome experience no matter where you live. This virtual tour stop with Wave will be a special one.”

Galantis will use Wave’s proprietary technology to transform into custom avatars in real-time and perform an exhilarating, live 30-minute set. Fans from around the world can join via Galantis’ YouTube channel as Seafoxes, embodying the beloved Galantis mascot for the show. The show will be a magical, one-of-a-kind live experience, incorporating fantastical elements and surprises fit for the Church of Galantis. The show marks several monumental moments for Wave. The show – premiering on YouTube – will be the first to capture two live performers with motion capture technology, translating Christian Karlsson and Linus Eklöw’s dynamic movements and artistry in the virtual world. As always, there will be unforgettable moments and very special cameos that can’t be missed. In addition, Wave will rebroadcast Galantis’ virtual experience across multiple time zones, allowing their fans from all around the world to experience the magic. A special virtual reality experience rebroadcast in the Wave app will also be available, time and date to be announced soon.

“This is one of the most breathtaking shows we’ve created,” said Wave CEO and cofounder Adam Arrigo. “We look forward to inviting Seafoxnation into this beautiful virtual venue. We loved collaborating with Galantis and the amazing team at Atlantic Records – we are believers!”

Internationally-acclaimed Swedish duo Galantis released their third studio album Church on February 7 via Big Beat Records. The collection takes listeners on a euphoric sonic journey, with the title extending beyond the words’ surface – rather tapping into broader senses of community and inspiration. “‘Church’ doesn’t necessarily refer to a building or specific religion,” explained Galantis, “but instead to people banded together in similar belief for a better humanity. Whether it’s advocating peace, change, or just lifting each other up – that is our ‘Faith’ and ‘Church.’”

Galantis & Dolly Parton’s collaborative single “Faith” saw a #1 debut on Billboard’s Dance/Electronic Chart before quickly reaching #1 on the Dance/Mix Show Airplay Chart where it remained for 5 weeks. The country music icon takes a leap even further into futuristic dimensions, with a celestial “cameo” in a live virtual concert hosted by Galantis. Her status as a pioneering trailblazer has no bounds. Look out for this moment with the biggest star, made of stars.

No headset is required for this virtual performance – simply attend through the duo’s YouTube Channel at the time of the event and be whisked away into the Church of Galantis. (A time and date for the rebroadcast of the special virtual reality experience in Wave will be announced soon.)

Setting a new standard for songwriting in dance music, Galantis is a collaborative project between Christian Karlsson (aka Bloodshy, one-third of Miike Snow) and Linus Eklöw (aka Style of Eye). Their debut album Pharmacy reached No. 1 on the Billboard Dance album chart on the strength of RIAA gold certified single “Peanut Butter Jelly” and platinum certified smash “Runaway (U & I)” – the latter of which earned GRAMMY nominations for “Best Dance Recording” and “Best Remixed Recording” – while their 2017 sophomore album The Aviary (featuring platinum certified single “No Money”) saw a top 10 debut in 23 countries. The duo have received over 3 billion cumulative worldwide streams, and over 1 billion video views to date.

The duo’s first new album in three years, Church, features Galantis’ explosive single “Faith” with country music icon Dolly Parton featuring Dutch singer-songwriter Mr. Probz. Praised as “a life-affirming dancefloor jam” by Entertainment Weekly upon release, “Faith” saw a #1 debut on Billboard’s Dance/Electronic Chart before quickly reaching #1 on the Dance/Mix Show Airplay Chart where it remained for 5 weeks. The track listing also includes the duo’s blockbuster collaborations with OneRepublic (“Bones”), Passion Pit (“I Found U”) and YellowClaw (“We Can Get High”), among new standout tracks “Never Felt A Love Like This” with Hook N Sling featuring Dotan and “Hurricane” with John Newman.

The story of Galantis started back in 2009. Working as Bloodshy, Karlsson’s songwriting collaborations have included Madonna, Kylie Minogue, Katy Perry and Britney Spears (whose “Toxic” earned a GRAMMY for “Best Dance Recording”). After reaching out to Eklöw (who produced Icona Pop’s hit single “I Love It” as Style of Eye) to remix Miike Snow’s “Animal,” the two continued to collaborate until ultimately Galantis was born. Following their blockbuster performance debut at 2014’s Coachella Valley Music and Arts Festival, the duo quickly rose to become one of dance music’s most dynamic and in-demand live performers.

Wave is an entertainment technology company and creator of the world’s first multi-channel virtual entertainment platform for live concerts. Using proprietary live broadcast technology, Wave gives artists a platform to perform live for audiences around the world, while bringing fans new and immersive connections to their favorite performers. Fans can attend Waves through YouTube, Twitch, Facebook and other massive digital or gaming channels. Users who wish for a more immersive experience can virtually attend an event as their own avatar, using Wave’s VR and PC desktop apps that are supported on Steam for HTC Vive, Oculus Rift, Windows Mixed Reality and other devices which can be downloaded here: http://wavexr.com/download. For the latest updates on the company and upcoming Waves, go to www.wavexr.com and follow Wave on Facebook, Instagram and Twitter. 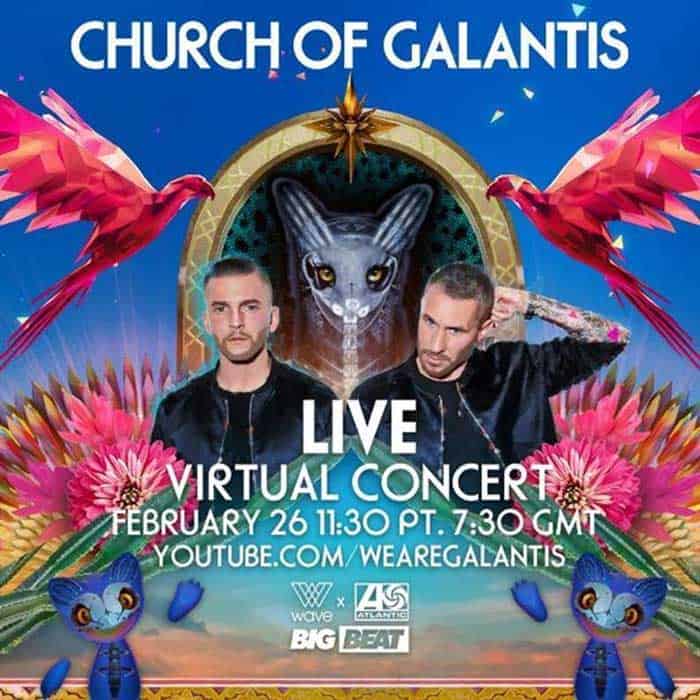 Church of Galantis: Live Virtual Concert features celestial Dolly Parton "cameo" in a live virtual concert on February 26 is highly popular post having 69 Facebook shares
Share with your friends
Powered by ESSB
Send this to a friend