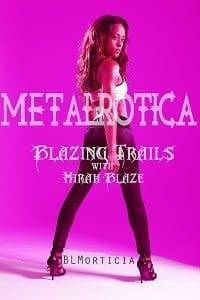 BL’s followup to The Wretched Takes serial is on Kindle Unlimited. I recommend you read the books first before reading Hirah so you’d know all the other characters. They are on Amazon for $0.99 a piece! 18 stories in all, bound into 3 volumes.

Here are the blurbs to each book!

If you want somethin’ real bad, you gotta work harder than everyone else.

Five months into it and I’m still pinching myself over this. Me, the little black goth girl from Milwaukee, along with Corey, Bryan Taylor, Nicolai Zander and the new guy on bass named Chad Stephenson.

Have I mentioned that Chad is hot as hell?

More about that later.

This is a spinoff of The Wretched Tales with new guitarist Hirah Blaze. She’s kicking ass and taking names, looking to become the metal world’s newest guitar goddess, but will she get sidetracked by The Wretched’s gorgeous new bass player?

This man had me.
Oh God, he had me in a freaking tizzy.
I want Chad.
I want Chad Stephenson.
I want him in my bed.
I want him now before we go on this stage.
Oh shit.
I am such a goner.
I am off the deep end now.
This wasn’t supposed to happen.
I’m supposed to be all about fucking world domination with my guitar, not obsessing over my hotter-than-hell bass player.

It’s show time for The Wretched. We’re about to go on tour and I’m stoked to be onstage in front of thousands. However, I can’t get a certain someone off my mind. Hot bassist, Chad Stephenson has become my crack and I’m happily addicted.

This is a spinoff of The Wretched Tales with new guitarist Hirah Blaze. She’s kicking ass and taking names, looking to become the metal world’s newest guitar goddess!

Romance and erotica author Sharita Lira believes that love conquers all. Writing sexy stories of people who might be complete opposites, but somehow make a lasting connection that often leads to a happily ever after. Happily married and mother of two, Sharita never allows complex plots to deter her from writing the story. Inspired by heavy music, attractive people she’s seen in person and on the internet, Sharita always has a tale on her brain. In addition to being a computer geek and a metalhead, Sharita loves live music, reading, and spending time with family and friends. She’s also a founding member and contributor to the heavy metal ezine FourteenG. For more information, please visit http://www.thelitriad.com and if you’re a fan who would like exclusive updates on her writings and chances to win prizes, sign up for the newsletter!