The enchanting tourist places of Egypt attract lots of visitors for decades due to to its privileged position and the convergence of the ancient world continents Asia, Africa, and Europe through it, and if we say that Egypt has countless monuments, tourism in Aswan includes many of these attractions and more than historical monuments.

Although the landmarks of ancient Egypt are quite different from any historical monuments in the whole world, it is not the remains of buildings, palaces or temples, but it is a complete civilization still temples full of splendor and beauty.

Aswan is not only an ancient monument, but there are many important landmarks you can visit through enjoy  Aswan day tours. Natural scenery, great waterfalls and also the High Dam symbolize the struggle and success of the Egyptian people for development and prosperity.

Best Places to Visit in Aswan

Now it is time to visit one of the most beautiful cities in the world, the city of Aswan.

The two temples of Abu Simbel are considered one of the most important tourist attractions in Aswan. The temples are currently located west of Lake Nasser, the largest artificial lake in the world, but this was not the original location of the temples, where the Great Nile River flooded that site after the diversion of the river during the construction of the High Dam. UNESCO pledged with the other countries in dismantling these temples and moving them westward to their current location.

These temples were built by King Ramses II in 1244 BC, the Great Temple dedicated to him, and is led by four huge statues of the king, and at his feet, there are small statues representing the king’s sons, his wife, and his mother. The temple has two major events repeated every year, attracting thousands of tourists to watch the sun baptize on the face of the king’s statue in the Holy of Holies, the king’s birthday and the day of his coronation.

The Philae Temple is one of the most important and important tourist attractions in Aswan. It is a very popular and attractive place in the world. It was saved from drowning by the UNESCO initiative during the construction of the High Dam in the 1960s. It was transferred from Philae Island to the island of Agilkia, south of Lake Nasser. The process of saving this temple took nearly nine years, involving a large number of countries in the world, and used advanced technological methods.

The temple dates back to the 3rd century BC to worship the god Isis, followed by the Greek, Roman, and Byzantine eras, where each era left its own character on the walls of the temple, where visitors see many huge columns, and murals with wonderful paintings. Reaching the temple will be a spectacular boat trip on the Nile where dozens of pictures of the magnificent landscapes are taken.

The High Dam of Aswan is considered one of the most important tourist attractions in Aswan. This huge building besides the greatness of its design and importance, tells the story of the struggle of the Egyptian people to achieve a dream they have long wished to achieve. It was the biggest challenge faced by the Egyptian revolution in 1952, in addition to being the largest engineering building on the level of World in the twentieth century.

The importance of the High Dam is due to its role in protecting the country from the floods of the Nile River, which were threatening the country every year, submerging hundreds of villages, and in a few years was exposed to drought and destruction of planting, and the solution was to build the High Dam, which was trapped huge amounts of Floodwater to be the largest artificial lake known to man, to release water as much through the openings in the body of the dam, as an industrial waterfall manages dozens of turbines to generate electricity, including running dozens of factories and illuminating hundreds of villages.

The small temple is dedicated to Queen Nefertari, wife of King Ramses, and to the worship of the goddess Hathor. These temples are a picture of the greatness of ancient Egyptians and their abilities in the design and execution of engineering masterpiece, which is still a mystery puzzles scientists so far.

The Unfinished Obelisk of Hatshepsut

The Unfinished obelisk is located in the southern part of the Egyptian quarries, and is one of the most important tourist attractions in Aswan and the longest Egyptian obelisks ever on the ground at the site of its establishment, to be a witness to the accuracy and ability of the Egyptian manufacturer in dealing with giant granite stones, and this is likely to be The obelisk was carved during the reign of Queen Hatshepsut, as most of the obelisks were created in its era, but a crack appeared in the obelisk’s body which led to the cessation of its completion to remain a trace on the ground.

Visitors can see many carvings of animals and birds carved on the obelisk walls and take many memorial photos.

Created by the Egyptian architect Mahmoud al-Hakim, he faithfully conveyed the authentic Nubian spirit and vocabulary of life in a way that stunned the world using surrounding environmental rocks, inspired by prehistoric caves with their primitive inscriptions, and examples of the Nubian house with its artistic touches, engravings and bright colors.

He was also keen on the presence of touches of different civilizations that have gone through them as the minaret reflects the Islamic civilization, and the many collections that shed light on the life of the ancient Nubians such as pottery, small sculptures of burnt silt, and many coins and bronze pots, and the ancient Nubian civilization is still of interest Researchers in many countries of the world.

The temple of Kom Ombo was built on the banks of the Nile River, to worship the gods Horus the Great and Sobek, which has two identical entrance in the form, and inside the temple many halls with columns and exquisite paintings and inscriptions, and many of the sanctuaries that show the extent of the interdependence and sanctification of these gods. There is a collection of statues that have a special sanctity for the ancient Egyptians.

What distinguishes this landmark in addition to its historical status and is one of the attractions of tourism in Aswan, is the means of access to this temple, which is made by sailing on the Nile cruises to reach it with all the beauty of nature and the magnificence of the scenes experienced by the tourist and worthy of registration through Memorial footage.

The Nubian village has been able to attract tourism in Aswan by providing a vivid and realistic picture of Nubian life, where Nubian civilization is often different from the ancient Egyptian civilization in the lifestyle and distinctive character in clothing and food, designing and decorating houses, and using the surrounding environment materials in building their homes. To achieve full harmony with them, and provide a healthy and refreshing and self-adapted atmosphere away from the heat of the heat that is the character of the country, so deserve to be included in the tourist places in Egypt.

These simple things will attract you very much, and you will be delighted to have a wonderful time accompanied by hospitable people who are warm and welcoming their guests, and experience Nubian clothes, famous Nubian food, handicrafts and crafts, and you will also be surprised by the cleanliness of buildings, streets and houses where the people of Nubia depend on themselves in the cleanliness of their village, For them hygiene is a way of life.

The Temple of Kalabsha is one of the most important Egyptian Nubian temples, and one of the most important tourist attractions in Aswan, was built in the early Roman era in 30 BC in the Ptolemaic period, with a distinctive design, to worship the god Mandoles, the sun god Nubian, and is a tourist attraction in Aswan Can be visited through Nile cruises.

Kalabsha Temple is located on an island in the center of Lake Nasser, next to the High Dam, about 16 km from Aswan. The temple was threatened with drowning under the Nile due to the construction of the Aswan High Dam, but the temple was moved to the shores of Lake Nasser, as part of the UNESCO initiative to save the Nuba ruins in the 1960s.

It is a colorful bazaar, locally known as the Sharia Market, and is the cheapest place to buy souvenirs in Aswan. The bazaar is located four blocks from the Nile and runs about 7 buildings parallel to the river, and includes many Egyptian and African goods.

Traders sell a wide range of commodities such as perfumes, peanuts, henna powder, dried hibiscus flowers, spices, various types of dates that Aswan is famous for, famous Nubian shirts, and Egyptian-style souvenirs. In the side alleys, you’ll find merchants selling Nubian replicas such as boaters, amulets, baskets, Sudanese swords, carpets, and stuffed animals such as crocodiles.

Finally, at the end of our tour about the best tourist attraction in Aswan, did you decider where you will visit in Aswan. Don’t forget to enjoy  Egypt day tours and explore the best enchanting places in Aswan & discover what Egypt has to offer.

This Kate James, Lover of Adventure. I love to travel around the world and discover something new. I’d love to share my experience when traveling to an mazing destination especially if it’s historical and ancient. 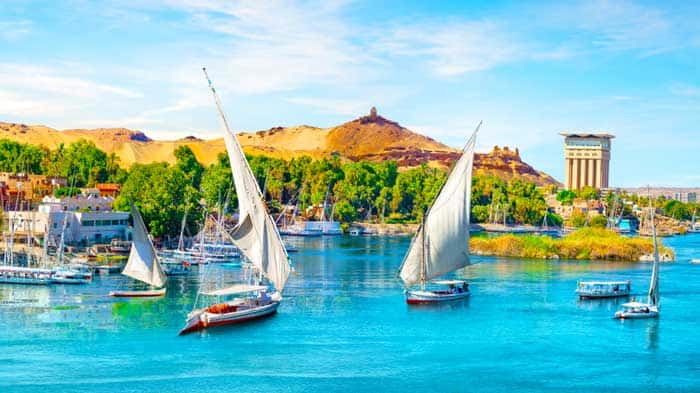